Remember the Everly Brothers? Still listen to The Beatles? Does rock ‘n’ roll make you want to get up and dance? Then you’ll love this year’s Carnival show, which is on at The Guildhall, Chard during Carnival week.

Celebrating 50 years of Chard Carnival, Chard Entertainment’s latest production ‘Free And Easy’ is an opportunity to tap your feet to some of the classic pop songs of the 50s and 60s.

Set exactly 50 years ago in 1967, it’s a comedy about a northern pub where Free and Easy nights (Karaoke, as it is known today) are the main attraction. With a live band actually on the stage and featuring a host of tunes that you know and love, it’s the ideal way to spend an enjoyable evening.

Following on from the enormous success of The Vicar of Dibley – last year’s Carnival show – was never going to be easy, but Chard Entertainment Chair, Neil Wells, is confident that this production will provide the audiences with a great night out. “These songs are almost timeless, and bring back such amazing memories. In addition, this is one of the funniest show we’ve ever done and I know our audiences will have a really good time.”

‘Free And Easy’ will be staged nightly at 7.30pm from Wednesday 11th to Friday 13th October at The Guildhall, Chard. Tickets for the show are available from Barron’s, Holyrood Street and cost just £8. You can also buy online at www.ticketsource.couk/chardentertainment where a small booking fee applies. 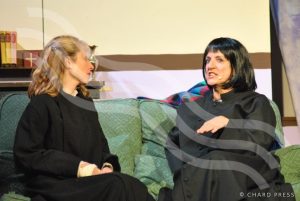 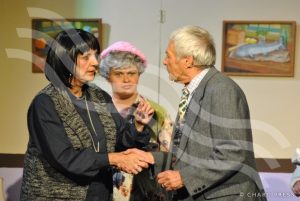 Please note that the Society’s AGM will be held on Monday 25th July at 7.30pm in the ballroom of The Phoenix Hotel, Chard.

The meeting will include the election of Officers and Committee members for the coming year. To access the official notification and nomination form please click here.

Members are reminded that subscriptions for 2016/17 are now due. 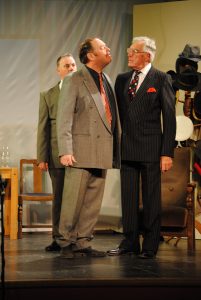 OMTG performance and the rest of the cast rose to his lead. Many thanks to Philip Wells for directing and to the unsung support team – Simon Cobbledick behind the scenes as stage manager, Brian Eastell for superb sound and Richard Cook for great lighting, with their aide Dom Wilsher. 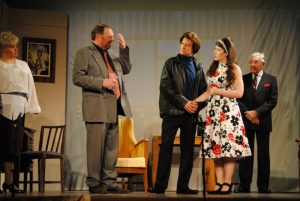 Following auditions on 13th June, Jack Price has made his casting decisions as follows:

Thanks to Adam for stepping in to the Owen role – we’re sure he will do it justice!

Rehearsals will start at 7.30pm on Monday 4th July in the ballroom of The Phoenix Hotel, Chard. A full rehearsal schedule can be found here

Following the read through at 7.30pm on Monday June 6th at The Phoenix Hotel ballroom, auditions for The Vicar of Dibley will be held on Monday 13th June at the same venue, starting at 7.30pm.

Everyone is welcome to come along and try for a part.

You will find the audition pieces here

To be staged on October 5th, 6th & 7th during Carnival Week in support of Chard Carnival, this hilarious 2-act adaptation of the hit TV series ‘The Vicar of Dibley’ will be directed by Jack Smith. It features all the well-known characters, so there’s plenty of opportunity for a wide range of ages and talents.

An initial read through will take place on Monday 6th June at 7.30pm in the ballroom of The Phoenix Hotel, Chard (side entrance, turn left up the stairs, then turn right and go through double doors). Auditions will be held at 7.30pm on Monday 13th June at the same venue. Everyone is welcome.

In the seaside town of Brighton in 1963, Francis Henshall has just been fired from his skiffle band. Despondent and desperate for fish and chips, Henshall ends up in the employ of Roscoe Crabbe, a small-time hood from the East End of London. But it turns out that “Roscoe” is really his twin sister Rachel in disguise, because Roscoe was murdered by Rachel’s boyfriend Stanley Stubbers.

As fate would have it, Stanley is also hiding out in Brighton and waiting to be reunited with Rachel, and employs Henshall, as well. In order to keep both his jobs Henshall, who is also working on a romance of his own, must keep his two guvnors from discovering each other… will he succeed??

CES is pleased to announce that Grant Davies will be playing the part of Alan Dangle in ‘One Man, Two Guvnors’.

Other minor parts will be cast without audition